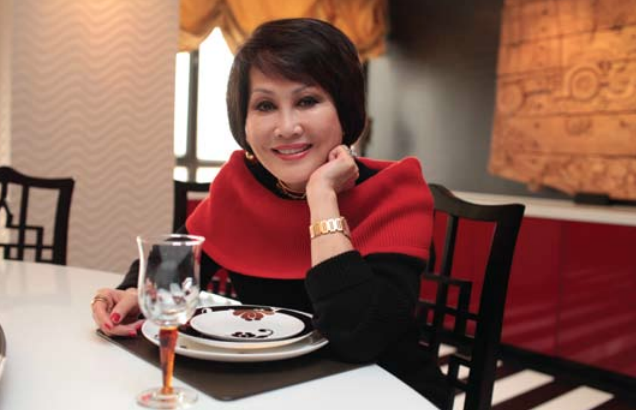 In China there’s no place for me to be myself except in my home. The moment I step out the door it’s not me. I haven’t changed, but the way people treat me does because of who I am.” So said Yue-Sai Kan the last time we interviewed her back in 2005, which might explain why she was reluctant to meet us for lunch anywhere but in the safety of her sprawling, luxury apartment, which takes up an entire floor of an exclusive block on Beijing Xi Lu.

Emmy-winning television personality, author, businesswoman and philanthropist, Yue-Sai was the woman who, on the 35th anniversary of the PRC in 1984, did the first live broadcast from China to the West, who popularized makeup with millions of Chinese women with her multi-million dollar Yue-Sai Kan Cosmetics Ltd, who has appeared as a character in a cartoon series and on a commemorative stamp, who bankrolled and had fashioned in her own image the Asian version of the Barbie Doll (the Yue-Sai Wa Wa) and who was described by Time as the “Queen of the Middle Kingdom.”

There is only one thing that YueSai wants to talk about today, though – her latest venture, and one she describes as “the most hectic thing” she has ever done – Miss Universe China, of which she has just become the National Director. So how did it all come about?

“In 1987 I was a judge of Miss Universe in Singapore, and I was impressed by how professional it all was. We weren’t even allowed near contestants, they kept us in a different hotel.”

“Then in 2002 they asked me again, the first year there was a Chinese contestant. Every year since Miss China has done really poorly, and the last two years were disastrous. They came last in almost every category. It’s a little embarrassing to see the Chinese performing so poorly on an international stage. They didn’t take it seriously, the people who had the license – they didn’t take care of the training.”

Miss Universe have been trying to get her to take over the National Directorship for a number of years, Yue-Sai says, but she always felt it was too much to take on with all her other commitments. “And then when I saw this last competition, they asked me again, and I thought, ‘We should do it.’” She signed the deal in February, and last month began an eight-city tour of China, looking to recruit 30 girls to vie for the Miss China title.

Aside from a heartfelt desire for world peace, what is she looking for in potential contestants? “There are a few basics. Today you can’t be under 168 cm (it doesn’t matter if you’re exquisite, it doesn’t work if you look tiny on stage) you must be 18 to 27 years of age, have never been married and you cannot have had babies – you are Miss Universe, you know, not Mrs. Universe.”

And what about personality? “Looking at how hard Miss Universe works, you really have to be able to work under pressure, and at the same time always be charming. You represent all the best there is in a woman. There can be no complaining, because there’s going to be a lot of work. And of course the more charming and delightful she is the better.”

Recruiting is just the start; once the 30 are selected the hard work begins. From June 19 there will be 23 days of “military-style training, from eight in the morning – exercise, English lessons, etiquette, makeup, hair, how to carry themselves on stage, how to answer questions – we will drill them until everything becomes second nature. We’ll have a team of experts to cover each discipline.”

The Miss Universe China final will be held in Sanya on July 10, and broadcast live on Guangxi Satellite TV (“known for its fashion sense”), with the winner and the first runner-up going to New York for three weeks additional training in preparation for glitz and glamour – and the tantrums and tiaras – of the September 12 Miss Universe final in Sao Paulo, Brazil.

“They will stay in my house in New York,” explains Yue-Sai. “Miss China will work for me for a year, participating in my charity events and some of my commercial events. If the first girl becomes Miss Universe, I lose her, and the runner-up becomes Miss China, so I’ll train her just as well as I train the number one girl. The girl who makes it will hopefully consider it the high point of her life – that she learned so much and was exposed to so much.”

So what does Yue-Sai feel about worldwide perceptions of Chinese beauty, does she feel they are changing? “Not too long ago people thought Chinese women were short hair, Mao jacket, bicycle and dumpy looking, right? But all of a sudden in the early ‘90s, we had women entering a new business called modeling, and Yue-Sai’s cosmetics came out and said, ‘You can be beautiful using this product’ and for the first time they realized, actually you can change the way you look. Today, most haute couture fashion shows use a lot of Chinese fashion models. They are becoming part of the landscape, there is no need to say, ‘She is a Chinese model’ – she’s just a model.”

What does she ascribe this change to? “Just because China is opening. When I started my TV show in 1986, CCTV had four to six hours of programming a day and was only one station. CCTV was extremely backwards, there was no real news; the anchor people would read what the government propaganda department sent over that day, and they dressed very severely – no makeup, no fancy hair. Everything was closed.

“When I started television the minister of television and film broadcasting said to me, ‘Is this how you dress when you do your programs in America?’ I said no, and he said, ‘Well why?’ I told him I looked at his own anchors and they all looked so plain and I didn’t want to be outrageously different from them. He said, ‘No, what we want you to do is what you do in the West.’

“In China there was no such thing. A girl in her twenties today, her grandmother will have never worn lipstick, and her mother will have worn little makeup. They never had that, they never learned. So they learn from television, from magazines, from the Internet now, of course. In terms of beauty, the new generation is vastly different from the old generation. The new generation actually goes backwards and says, ‘Mom, this face cream is for you.’”

So we have to ask, what of Miss Universe head honcho, king of the comb-over, Mr. Donald Trump? “I think that Miss Universe is probably one of his favorite companies, because don’t forget, Donald also owns a modeling agency, and this gives him worldwide reach.” So what is ‘The Donald’ like in person? “You don’t really talk that much when you are with Donald Trump. He talks a lot. I think he is used to having people listen to him – people expect to listen to him. It is difficult to think of him sitting there listening to what you are saying because he has so much to say, whether you like it or not.

“But he’s a very clever guy… I mean he really is a very clever guy. And his children are very well brought up, his son and his daughter Ivanka; both of them are terrific kids. That, of course, is Ivana’s children. I just saw his other wife, Marla Maples – she’s still very beautiful. He marries beautiful women. I think he likes beautiful women. His current wife is quite pretty too.”

What about his announcement that he may stand for president, and his abrasive comments about China’s rise – does she think that might affect the chances of a Chinese Miss Universe contestant? “No. It’s like – does it affect him selling his condominiums? I don’t really think it does. And besides, just because he says he wants to run, doesn’t mean the public would accept him. He’s a maverick, and he also loves attention. I think everybody knows that, he really does.”

So what did she think of what he was saying about China, that it is effectively screwing America over at the moment? “I don’t think he really knows what he’s talking about. I don’t even know if he has been to China for that matter – I don’t really think that he has. But did you notice that almost every president, at the very beginning is always anti-Chinese, until they become president? Now the reality is that you can’t really be antiChinese. What is there to be so anti about, you know?”

So what does Yue-Sai think a Miss Universe win would mean to China? “To be honest, I would like to be one of the top 10 this year. If she can come higher that’s great, if next we can be top three, I’d be really thrilled. And if by the third year we get Miss Universe that would be totally amazing. It would be wonderful for everybody and from every point of view. It’s not easy, but we’ll try very hard.”